By all family accounts, Vladimir was the eldest child born to Nicholas and Ekatrina Ligda. The only evidence we have of him is an undated photograph taken in Russia. 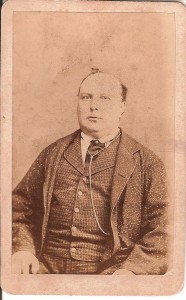 Vladimir was probably born in 1828 in or near Moscow (the year of Leo Tolstoy’s birth) and grew up during the reign of Czar Nicholas I. His niece, Valentine, says he was trained by a private teacher, but this is unlikely, as laws banning private instruction were not eased until after Nicholas’ death in 1855. By that time, Vladimir would have been beyond his years of formal education. There is no indication he served during the Crimean War (1853-56). His nephew, Alec, said he owned a bookstore in Kharkoff. 1

Vladimir lived in changing political times. Czar Alexander II (1855-81), Nicholas’ successor, initially eased political repression which included censorship of books and regulation of sales. Yet, in 1861-62, the government promoted the arrest of publishers and writers. 2 Vladimir would have been subject to considerable scrutiny. Most probably he would have had to bribe police and other officials to remain in business. Ironically, the same period witnessed the development of some of Russia’s great composers: Alexander Borodin (1833-87), Peter Tchaikovsky (1840-93), and Nikolay Rimsky-Korsakov (1844-1908).

Between 1863 and 1873, Poland was in active revolt against Russian rule. In combating that revolt, Alexander’s regime hardened and became more reactionary. In 1866, after an attempt on his life, Alexander declared martial law in St. Petersburg. A great many people were sent to Siberia. 3

Family accounts indicate that Victor, Vladimir’s brother, became disenchanted with the political climate in Russia, openly criticized the Czar, and left the country in 1874. Vladimir and Victor were very close, but Vladimir remained and continued to operate his store. He would later join his brother’s family in Paris. The reasons are not clear.

In 1881, Alexander II was killed by a bomb thrown as he passed through the streets. The new Czar, Alexander III, was determined to avenge his father’s death and turned Russia into a police state with “Reinforced Safeguards.” Those safeguards included the right to imprison anyone for up to three years, to close enterprises, and to declare anyone “untrustworthy” making them ineligible for civil service. 4 There was also stern regulation of the press and many newspapers were stopped. 5 Vladimir might have found operating a bookstore in this environment too uncomfortable or risky and sought escape in France. On the other hand, as Vladimir never married and had no children, it is possible he left Russia after his parents died and his brother was his only remaining family.

We have no indication of what work Vladimir did in France, but he liked the country and remained there when Victor moved with his family to the United States in 1889. Altho I was unable to find a record of his death in Paris, there is a notation in my baby book (1934), that he died in there in 1900. As there was no indication that his niece, Olga, saw him on her return to Paris in 1902, the report of his death two years earlier seems likely. His niece, Valentine, says he left his property to his nephews, but they did not return to France to claim it in the belief they would not be allowed to remove it from the country. If so, the property probably escheated to the State.